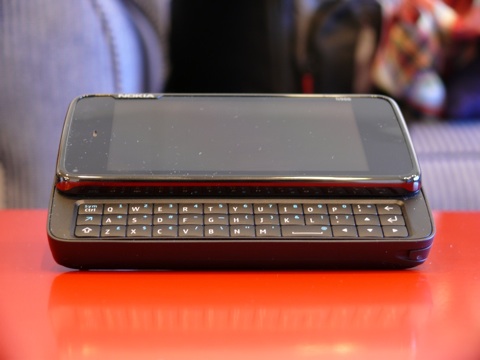 Nokia is well-known for its widely popular phones such as the Nokia E71, N95, and N97. Nokia recently released the N900 smartphone that brings along tons of features and impressive specifications. We’ve been following all the news and rumors on this phone and, needless to say, we are excited about getting one. The phone was introduced into the United States on November 11, 2009 and is not yet available to purchase directly from any major carriers here. The N900 used the Maemo 5 Linux operating system, unlike its predecessors which ran Symbian. This was a unique review for us because we haven’t had much experience with Maemo, so we had to learn the OS from scratch. Typically when we review a device, we have at least played around with the OS. Therefore, we are excited to bring you the Nokia N900 review.

We were really excited when DHL (shoutout to @boygenius) dropped off the package. Coming from a BlackBerry 9700 and iPhone, we were definitely excited to try something new. Upon unboxing the phone the first thing we noticed is the size and weight. The N900 is noticeably thicker and heavier than both 9700 and iPhone. The first phone that comes to mind when comparing in size and weight would be the HTC Tilt. This does not necessarily bother us since this phone crams a lot into one phone, but when comparing devices it is really noticeable. 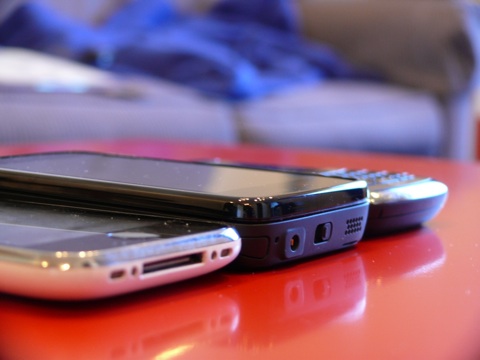 There are no physical buttons on the front of the phone when closed. The screen is all touch and everything can be controlled with a finger or using the included stylus. When looking at the sides of the phone you will see a volume button, power button, camera key, and a screen sleep trigger. On the bottom side of the phone there is a 3.5mm headphone jack, speaker, and a stylus that can be pulled out. There is no physical call and hangup button, meaning the user needs to go through the menus to make a call or use the slide-out keyboard to dial a number. We would have personally liked a dedicated key to call since it can be a hassle to go through the menus. 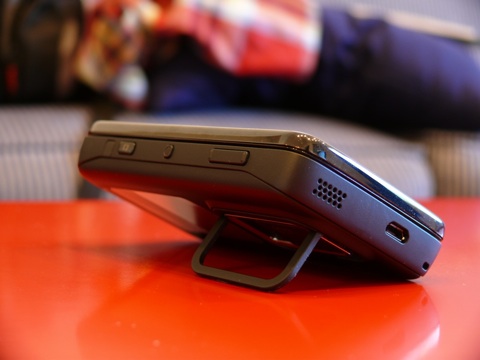 The Nokia N900 has some impressive specifications that make the phone really shine. The N900 has a ARM Cortex-A8 600 MHz processor and 1GB of application memory (256 MB RAM and 768 MB virtual memory). These internal parts really make the phone run fast and allows users to multitask without the phone slowing down. We were often multitasking with three or four applications open at the same time and noticed no system slowdown. We liked how we could easily listen to music, surf the internet, and check Maps. The N900 also has 32GB of internal storage meaning it will hold about 7000 MP3 songs, you can also add 16GB of additional storage using a microSD card.

As we said before, the N900 has a slide-out QWERTY keyboard. The keyboard has three rows of keys and most keys have a second feature that can be accessed by holding the blue arrow then pressing the key. We found the keyboard pretty cramped and to often be hard to use because of how it is set up. For example, the space bar is positioned more right on the N900 than on a normal keyboard or other phones are used to. We also found ourselves clicking the wrong key or clicking two, even when we got used to the keyboard.

The screen quality on the N900 was very impressive. The display is touch-sensative and has transflective technology that allows for easy use while out in the sun. It has a 800 x 480 pixel resolution and it really looks pretty awesome and sharp. When pressing things on the display with your finger, it seems to be accurate most of the time. For those with fat fingers, the phone also comes with a stylus that works fine.

The N900 comes with a 5 megapixel camera that takes some nice looking photos. Check out some samples below. 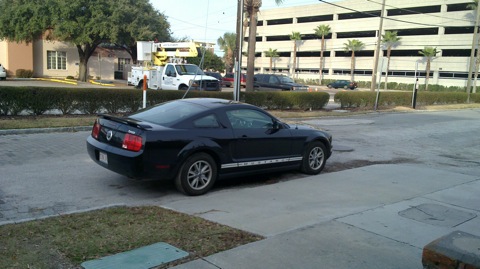 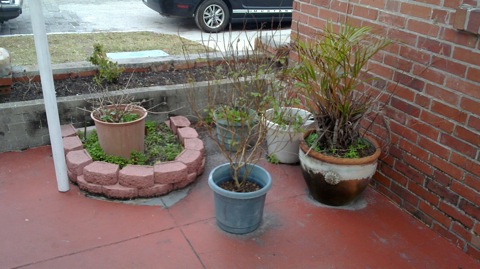 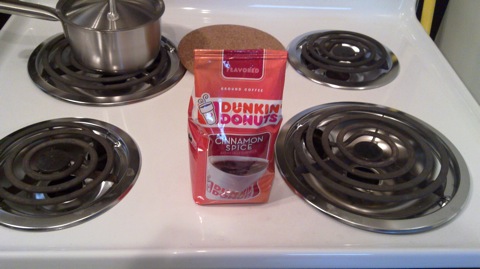 The Nokia N900 uses the Maemo 5 operating system which is based off Linux. Maemo is definitely different than the Symbian operating system  Nokia fanatics may be used to. Maemo in the past has been used on Nokia tablets and the company seems to be wanting to expand the operating system onto smartphones as well. This was the first time we’ve tried Maemo 5 so it took some getting used to. We found that it took a while to get used to because it was so different from other smartphone OS leaders like iPhone OS, BlackBerry OS, and Android. 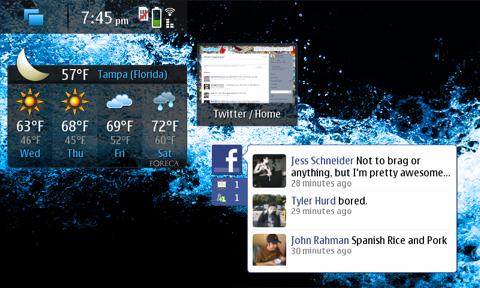 When you first turn on the phone you see the homescreen. The homescreen can be customized with widgets that either come with the phone or can be downloaded through the Ovi Store, which we will touch on later. There are four different pages on the homescreen that can be accessed by sliding your finger across the screen. If you don’t like having all those different views, Maemo allows you to remove the extra ones. 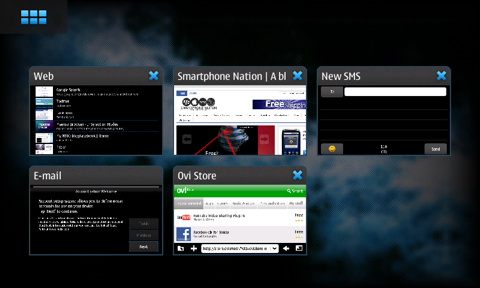 Another very important task on a smartphone is multitasking. We all know that the iPhone is lacking at this and that is one main complaint of the phone. However, the Nokia N900 does a great job multitasking a lot of apps at once. Once there is an app running, the user can click the top left icon that looks like windows and the phone will go back to the screen shown above. From there, users can click the icon on the top left, which looks like six small boxes, and will brought to the menu. To get back to the current running apps, just click the side of the screen and the user will be brought back to that screen again. With such powerful hardware, the N900 can easily run a lot of applications without the device slowing down much.

To many of us, one of the most important features on a smartphone is the web browser. Having used a lot of different mobile web browsers, we can say that the N900’s browser is one of the best we have ever tried. Most of the web pages we loaded up were rendered the same way as they would be shown on our computer’s browser. Scrolling up and down was as easy as sliding our finger up and down the screen. Zooming into text works perfectly by either double clicking the area you want to read or using your fingers to pinch and pull to zoom in and out. The real deal breaker on this browser is the fact that it has Adobe Flash built into it and that really makes the browser shine. When loading up sites like the New York Times, you can click on videos embedded into the page and they will play right in the browser. This is something that most other phones are missing at this point and it really makes the N900 browser different.

Nokia recently announced the beta of the Ovi Store, which allows users to download apps directly from Nokia. A application store is one of the most important features of a phone today with almost every phone manufacturer having one including Apple, Palm, and Google. Keeping in mind that Nokia’s Ovi Store is still in beta, it still needs some work in our opinion. Nokia chose to have the Ovi Store icon open up a browser that leads to a web-based store optimized for the N900 browser. This is different from Apple’s app store which is a physical application on the phone. The Ovi Store has a few different categories including Recommended, Apps, Games, Audio & Video, Personalization, and My Stuff. Clicking on one these tabs will bring you to the top applications in those categories. When browsing the store you can see the name of the app, the price, and how it is rated (out of 3 stars). We still think that this store could use a some work because it is pretty limited in the apps that can be downloaded and doesn’t really seem to flow as nice as other app stores on other phones. 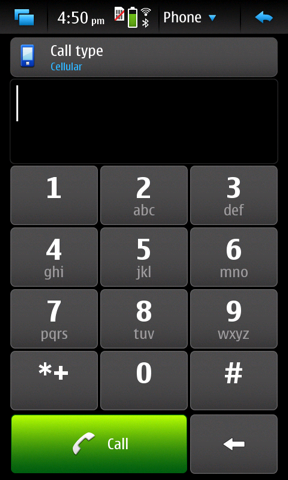 The most important feature on a smartphone is still the phone feature. When you click the Phone icon in the N900 menu it brings you to your most recent calls. It will show your most recent places calls, received calls, missed calls, and voicemails. If you already know the number you want to call you can just click the Dialing Pad and dial right from there. A great feature on the N900 is the built-in Skype support. If you have a Skype account, you can choose your Call Type by either using cellular or your Skype account. This is great for people using the phone internationally or regular Skype users. The sound quality when making a call was up to par with other phones we used. The people we called always said the microphone seemed to sound like any other phone. 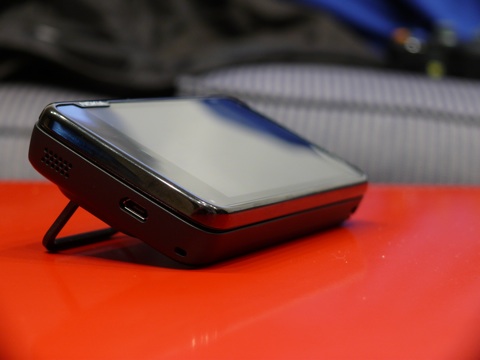 The Nokia N900 is a powerful phone with really impressive specifications. In our opinion Maemo 5 looks a lot better than Symbian and has a lot more potential to become a great OS. It takes a little while to get used to, but it does really shine when in use. We think that the web browser on this device is one of the best in the game especially since it has integrated Flash. There is room for improvement with the Ovi Store but it is usable at this point and allows for easy downloading of some apps. We really recommend this phone for people who want a tablet PC, but don’t want to have to lug it around with them all the time. We feel that the N900 is a tablet disguised as a phone and it feels that way when using the device.