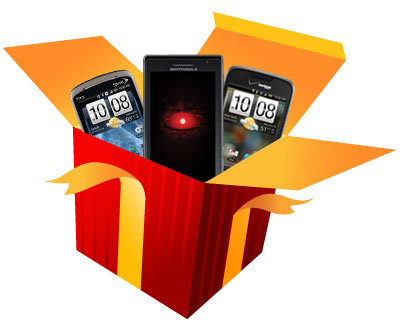 With the holiday season approaching fast, we at Smartphone Nation thought it would only be right to make a holiday gift guide to help you choose the perfect the gift. There have been many great phone launches this year; however, a few stuck out as superior. We have though of all major carriers when writing this review, so make sure to take carriers into consideration when making your choice. 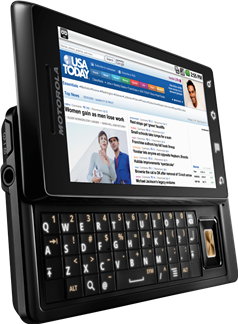 The Motorola DROID is a great smartphone choice that is only available on Verizon Wireless. The Motorola DROID runs Android OS 2.0 which includes some great new features like Google Maps Navigation. The DROID is great with media functions with 16GB of built-in memory and amazing screen quality. With its slide out QWERTY keyboard, the DROID is a great phone for texting and emailing on the go. We are confident that this gift will not disappoint the receiver.

The DROID ERIS is another Android smartphone that is in a lower price range. While the phone is not running the latest version of Android OS, it still has a lot of great features that will not disappoint. In terms of features the DROID ERIS has a 5 megapixel camera, 8GB of build-in memory, and a virtual QWERTY keyboard.

The HTC Hero has finally made its way to North America on Sprint and TELUS. You may notice that this phone is similar to the DROID ERIS, because it is virtually the same phone with a few hardware changes. This phone features HTC Sense, a skin that makes Android an even better OS. This small and lightweight phone has a 5 megapixel camera and a trackball for easy controls.

The BlackBerry Bold 9700 may be one of the best BlackBerry’s released to date. This phone is the latest edition of the widely popular BlackBerry Bold. With a trackpad, you don’t have to worry about the trackball getting stuck. The reviews of this phone have been fantastic leaving every BlackBerry user checking their upgrade eligibility. The Bold has 3G, Wi-Fi, and a 3.2 megapixel camera.

If you know someone who is addicted to his or her Palm Treo then it may be time to give them a new phone. If they like Palm devices, the Palm Pre could be a great option for them. The Palm Pre is the first device that runs Palm’s new OS, WebOS. WebOS is a great new OS that is great for multi-tasking and other phone features. The Palm Pre is a small touchscreen device that also has a slide-out QWERTY keyboard for easy texting and emailing.  The Palm Pre had a lot of hype when it first came out and current owners seem to be happy with the device.