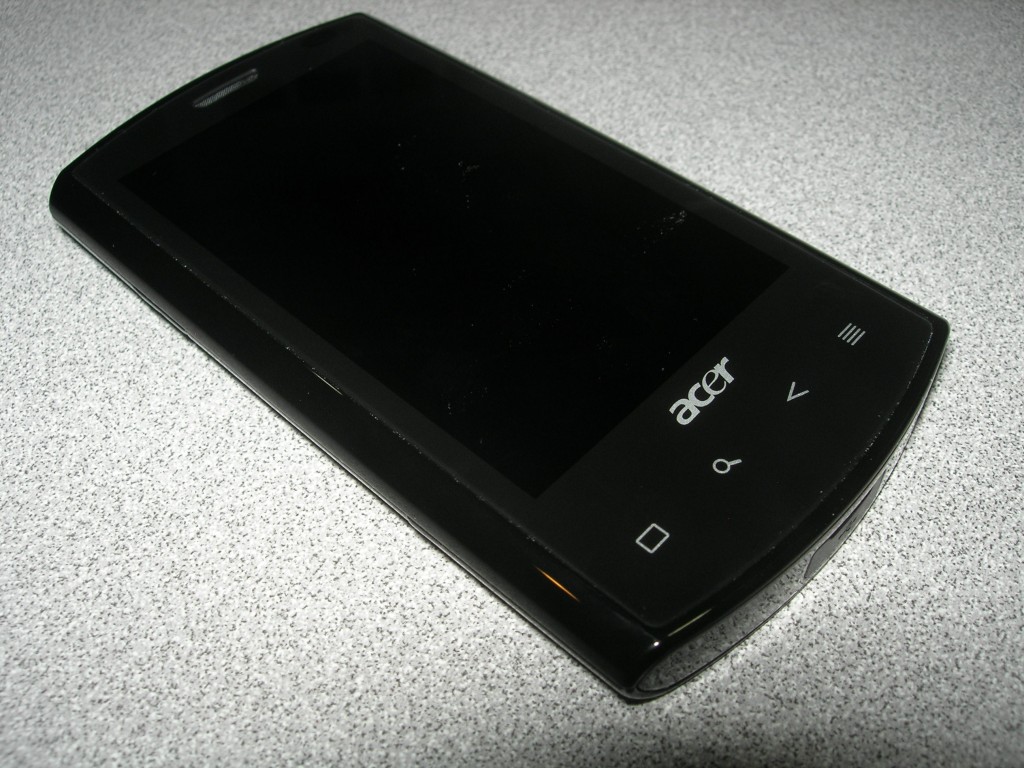 Earlier, we reported that Rogers had confirmed that they would be partnering with Acer to release the Liquid E. After about 4 months of long waiting, Rogers has finally released the Acer Liquid E in black. The Liquid E is the first Rogers Android phone to have the new firmware version 2.1 also known as “Eclair”, a long thin pastry made with choux dough filled with a cream and topped with icing. We don’t know why Android names all their OS’s as desserts, but its tasty and it works well.

The Liquid E will run you for only $49.99 on a 3 year voice and data plan which is quite cheap. If you don’t feel like sticking with Rogers. You can buy the phone outright at $424.99. The phone will include a battery, charger, headset, data cable, 2gb microSD card. Specifications include: 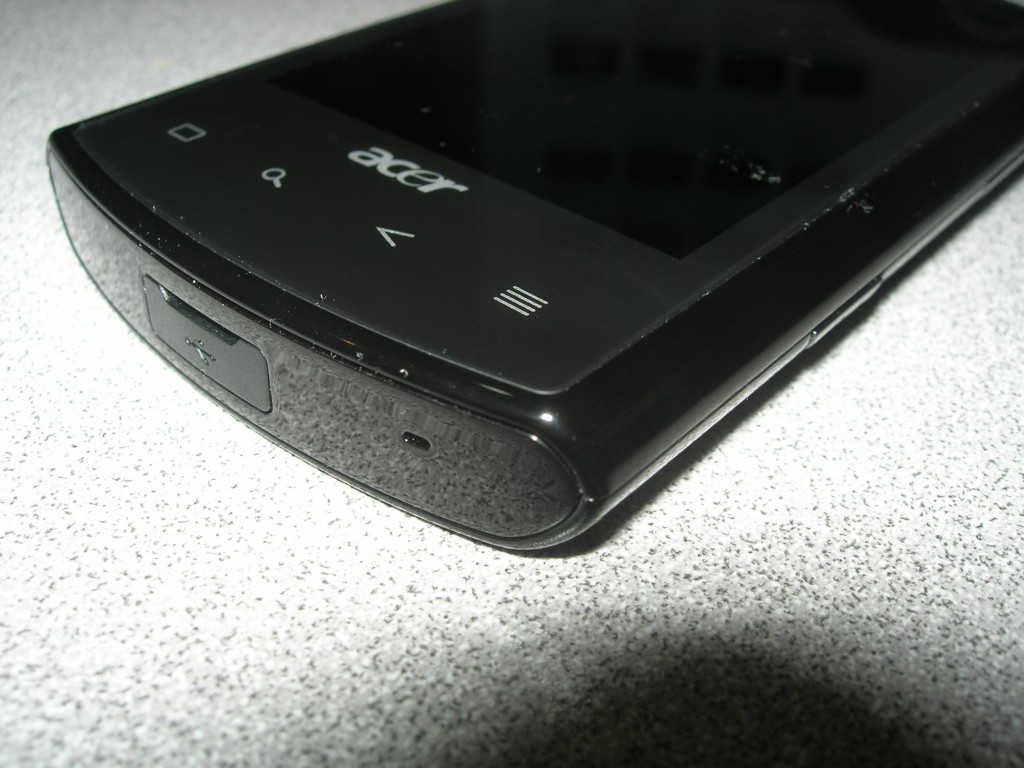 The sexy and sleek design of this phone attracts attention when being held up, but it also attracts many finger prints. I’d have to say it’s even worse then the iPhone, but the glossy all black design is a real head-turner. The curves of the phone makes it unique, but very slippery and quite hard to hold consider how wide and thick the Liquid E actually is.

On the front of the phone is a full glass touchscreen with dedicated home, search, back, and menu touch sensitive buttons on the lower bottom. At the back is the impressive 5.0 megapixel camera lens along with the speaker holes. On the top of the phone, you’ll find  a simple 3.5mm headphone jack. On the left is the dedicated sleep button which also acts as an on/off button when held. On the right you’ll find a volume rocker and camera key. On the bottom is where the miniUSB port is hidden by a rubber flap. I was curious to why Acer chose miniUSB instead of the microUSB where most cellphone companies have started making it standard. 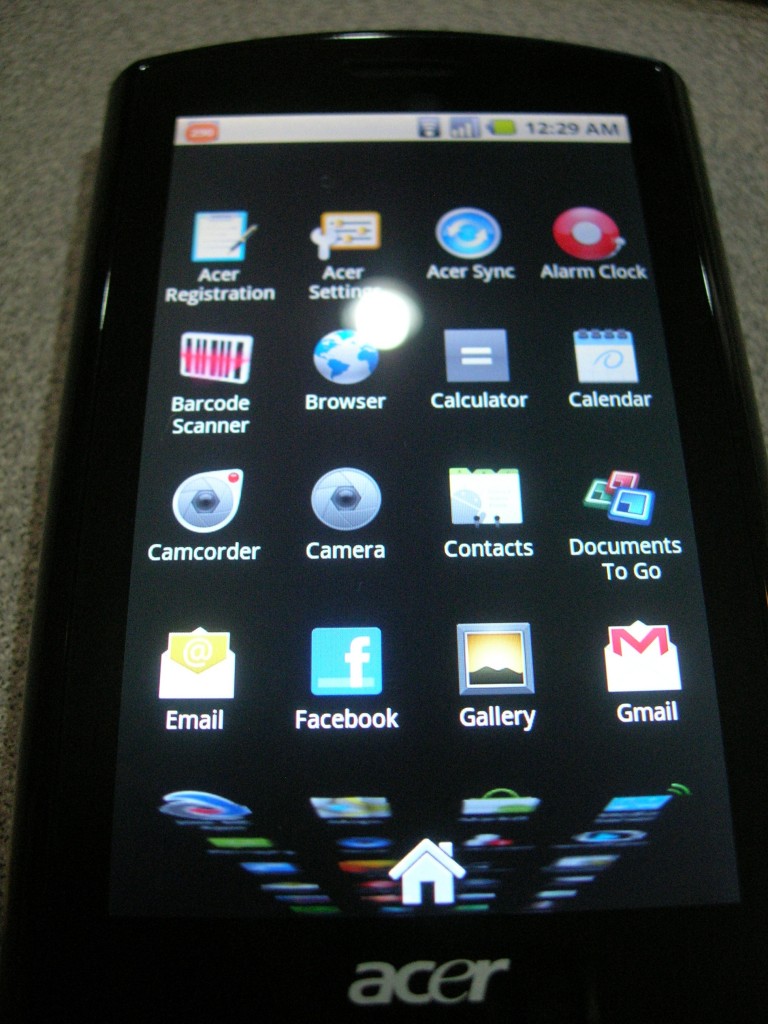 The Acer Liquid E is running on the new “Eclair” Android 2.1 firmware. What you’ll find new to this firmware is the homepage which now has a total of 5 screens instead of the previous 3. The menu is very different and is like a cube which allows you to scroll up and down while it slides. Acer has also thrown in a bunch of widgets and random crap that we really don’t need. I mean Android is open source. You should just sell the phone as is and let us customize it… That being said, it still is an improvement over the previous firmware’s that Android has released and everything seems to be much more snappier and smoother.

What we really liked about the new 2.1 firmware was mainly the pinch to zoom feature in the browser. It’s a small little feature that should have been available from the start of Android. We also noticed that live backgrounds pulse in different ways when you touch it. Android has also allowed multiple Gmail clients which is a huge step up for business users who have multiple accounts. 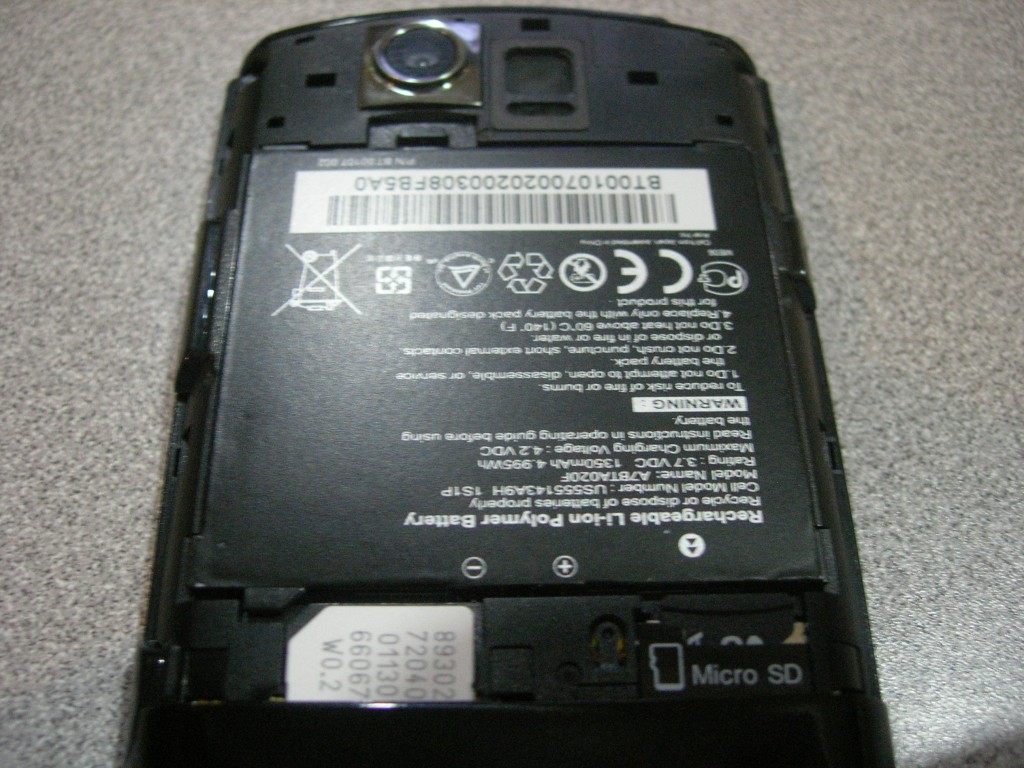 So with the Android 2.1 update, we’d expect everything to be much snappier and smoother, and we’ll agree it is… over the HTC Magic and Dream. Besides that, it’s really slow and lags even when scrolling in the main menu. The reason? We’re going to take a wild guess and say it’s because of the Snapdragon processor. The Qualcomm Snapdragon is in fact suppose to be one of the best cellular processors but Acer has done one of the dumbest moves and under-clocked the processor from 1GHz to 768MHz. Over 200MHz just gone.

As for the battery, it’s quite well compared to many other Android devices. It lasts about 12 hours on normal usage and requires daily charging as any smartphone does. It uses a 1350mAh Li-ion Polymer rechargeable battery. What I found annoying was that the MicroSD was being blocked by the battery. Now I know this wasn’t a big deal before but now it’s standard that the MicroSD card should be accessible without removing the battery. Just a small flaw that I found annoying. 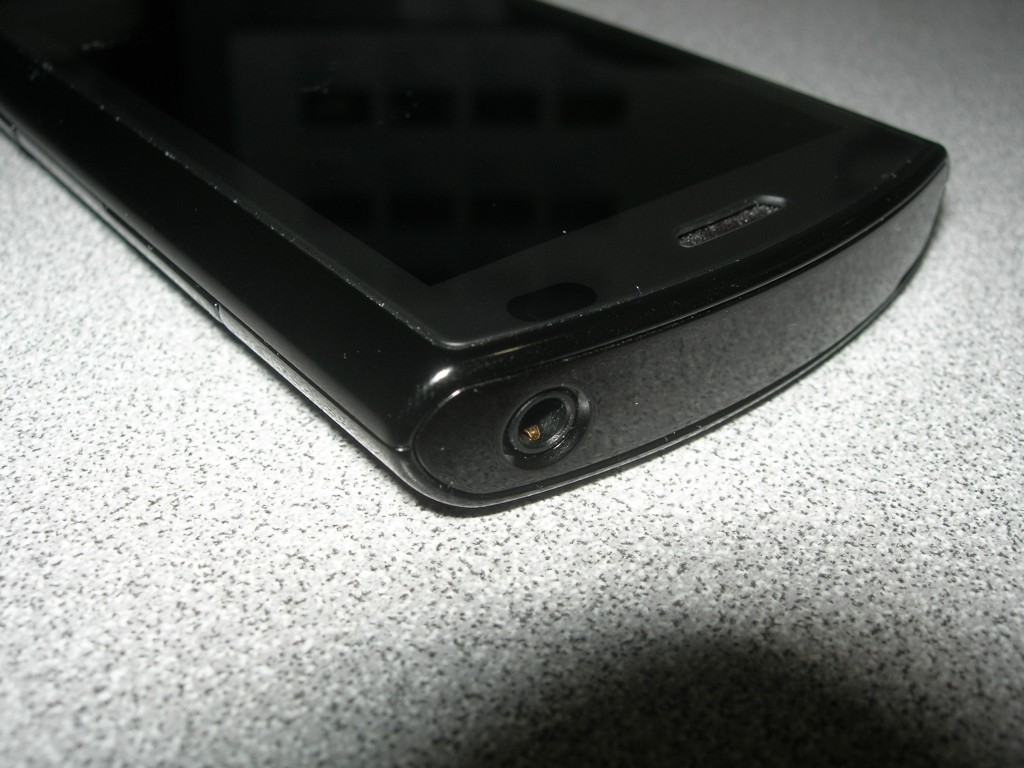 Acer is quite new to the mobile phone industry, and although this is an Android smartphone that does web browsing and the whole shazam. Some people might forget that it also does voice calls, something we often forget in a smartphone. So what can we say about the call quality? It’s quite good. Calls were absolutely clear with no drop calls. On the other hand, speakerphone was horrible. Not only was I not able to hear the other person because of the insanely crap speaker that had high treble and no mid, but there was echoing and lots of background noise.

Thanks to Rogers decent wireless 3G service, we were able to get signal almost everywhere with this phone. 3G stuck on 95% of the time while having the upgraded HSPA+ 7.2mbps speeds hitting on over 70% of the time. Signal never dropped randomly and in my basement alone, I was able to get at least 3 bars which is average. 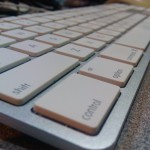 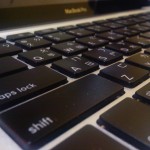 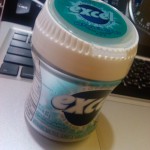 The Acer Liquid E features a 5.0 megapixel camera with auto focus and a very decent one but lacks flash. I mean Acer… common. Couldn’t you have put a simple LED flash? Picture quality decrease drastically in low lights due to the missing flash. In outdoor and bright lights, pictures are crystal clear and come out with strong vibrant colors.

There are multiple features in camera mode including ISO100 to ISO800 configuration. Not many cellphone’s have this option but what it lacked was macro mode. Something a 5 megapixel camera should have. You also have multiple color effects, white balance, anti flicker, picture size and picture quality options. All that are tunable to your liking. You’ll also now have the ability to record videos but only in VGA resolutions.

Although I found this phone to be quite feature packed. I just don’t think it’s really worth it. The phone in general is an under-clocked fatter version of the Sony Xperia X10. Acer has thrown in a bunch of useless applications and widgets that slowed down the phone tremendously. What I did like about the phone was the amazing LCD screen. It’s very clear and bright and probably one of the best quality LCD screen’s I’ve seen, but not the largest. In conclusion, if you can save the money and invest it in something better like the Sony Xperia X10 or even the iPhone 4 when it becomes available in Canada, you might just be more satisfied with your purchase.