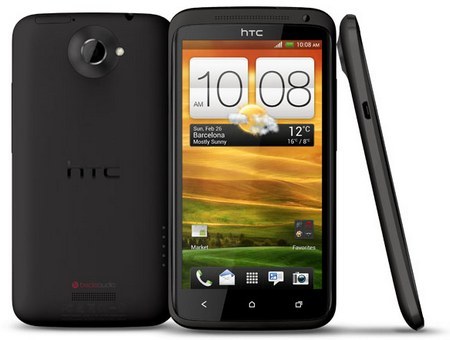 Where this phone really differs from other Android phones is with its HD voice-capability. Sprint will be the first US carrier to have a nationwide HD Voice network, starting late 2012. Sprint says that the service provides fuller, more natural-sounding and less fatiguing voice quality and should reduce background noises.

“Sprint has a long history of leading the wireless industry in innovation, and the debut of HTC EVO 4G LTE marks another chapter in that innovation story,” said Sprint’s CEO Dan Hesse. “Once again, we are partnering with HTC to deliver the benchmark Android device for the year with the next generation of our award-winning EVO brand. We know our customers will appreciate the focus on audio and voice quality with EVO 4G LTE, including the addition of Beats Audio and HD Voice capability.”

Check out the full press release below.

Available in Q2 for $199.99; Register for updates at www.sprint.com/evo4glte

NEW YORK (BUSINESS WIRE), April 04, 2012 – Sprint (NYSE: S), the only national wireless carrier offering truly unlimited data for all phones while on the Sprint network1, and HTC, a global designer of smartphones, announce the next evolution of the award-winning HTC EVO™ family: HTC EVO™ 4G LTE. HTC EVO 4G LTE focuses on exceptional improvements in camera technology, audio and voice quality on both the network and device.

HTC EVO 4G LTE will be available in the second quarter for $199.99 (excludes taxes and surcharges). The availability date will be announced later. Customers can sign up for updates today at www.sprint.com/evo4glte, and pre-order will begin Monday, May 7, at www.sprint.com.

With the launch of HTC EVO 4G LTE, Sprint becomes the first U.S. carrier to announce plans for a nationwide HD Voice network beginning in late 2012 as part of Sprint’s Network Vision program.

HD Voice is the next-generation evolution of voice quality and the future of voice communications for mobile phones. The service will provide fuller, more natural-sounding and less fatiguing voice quality and should reduce troublesome background noises often found in a cafe or on the street.2 Users should expect to identify voices and hear every word better than ever. Sprint’s commitment to HD Voice starts with HTC EVO 4G LTE, Sprint’s first HD Voice capable device.

“Sprint has a long history of leading the wireless industry in innovation, and the debut of HTC EVO 4G LTE marks another chapter in that innovation story,” said Sprint CEO Dan Hesse. “Once again, we are partnering with HTC to deliver the benchmark Android device for the year with the next generation of our award-winning EVO brand. We know our customers will appreciate the focus on audio and voice quality with EVO 4G LTE, including the addition of Beats Audio and HD Voice capability.”

HTC EVO 4G LTE incorporates Beats Audio across the entire phone experience, including playing music stored on the device, streaming from a favorite service, watching a movie or YouTube™ video, or playing the latest hot game. HTC Sync Manager software also lets users easily get their music on the device from their PC, and it works with current programs, including iTunes®.

“The partnership between HTC and Sprint has resulted in one of the most popular and successful smartphone brands of all time with over 7 million EVO devices sold to date,” said Jason Mackenzie, president, HTC Corporation. “With HTC EVO 4G LTE, we’ve created a desirable successor that is sure to excite the millions of current EVO customers and beyond with HTC’s distinct design, amazing camera and authentic sound.”

In addition, HTC ImageSense™ technology combines hardware and software advancements to the camera lens, sensor and software, including integration of a new custom HTC ImageChip, to take great photos even in adverse conditions. The best-in-class f/2.0 camera lens lets in 44 percent more light than the lenses used on most camera phones. The Smart Flash also adjusts the flash strength based on how far away the object is, so users won’t get photos where everything looks washed out.

Crafted from aluminum spaceframe in an anodized black finish, HTC EVO 4G LTE delivers cutting-edge function and style in a thin and distinctive design. The smartphone’s 4.7-inch display and 80-degree viewing angle makes it easier to share pictures and video with others. The multiposition kickstand allows users to watch videos hands-free.

HTC EVO 4G LTE customers can enjoy an unlimited data experience with Sprint Everything Data plans. Sprint’s Everything Data plan with Any Mobile, AnytimeSM includes unlimited Web, texting and calling to and from any mobile in America while on the Sprint Network, starting at just $79.99 per month for smartphones3 – a savings of $40 per month vs. Verizon’s comparable plan with unlimited talk, text and 2GB Web, or $10 per month savings vs. Verizon’s 450-minute plan with unlimited text and 2GB Web.

Sprint recently announced Atlanta, Baltimore, Dallas, Houston, Kansas City and San Antonio are expected to have 4G LTE and enhanced 3G service in mid-year 2012. Sprint 4G LTE will enable faster speeds for data applications, and the enhanced 3G service promises better signal strength, faster data speeds, expanded coverage and better in-building performance. The launch of these large metropolitan areas demonstrates the continued commitment by Sprint to invest in its network through Network Vision. Sprint customers in these areas will soon enjoy ultra-fast data speeds and improved 3G voice quality. Whether a Sprint customer is using a smartphone to share a video, checking the Web via a mobile hotspot, Sprint 4G LTE will make it easier. And, when someone makes an important voice call, they can expect to find a clearer connection and a stronger signal in more areas. For the most up-to-date details on Sprint’s 4G LTE rollout, please visitwww.sprint.com/4GLTE.