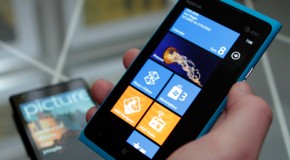 We were invited to a special event in NYC with Nokia on Friday. Nokia kept the details secret on what was happening but we suspected it had to do with the Lumia 900 launch

The Lumia 900 was announced back at CES and is finally getting released on April 8. AT&T is now taking pre-orders on the phone and is offering it for free to new customers. Existing

The Nokia Lumia 900 was announced at CES in January. The phone will be released on AT&T for a rumored $99.99. According to BGR, the Lumia 900 was delayed from March 18th until April

We had an opportunity to sit down for breakfast with the Product Manager for the Nokia Lumia 900. The Lumia 900 was announced yesterday at CES and features a 4.3-inch AMOLED ClearBlack Display and

Nokia held a press conference today at CES to unveil the Lumia 900. The phone will be available exclusively on AT&T in the United States, no date set for Canada yet. The Lumia 900