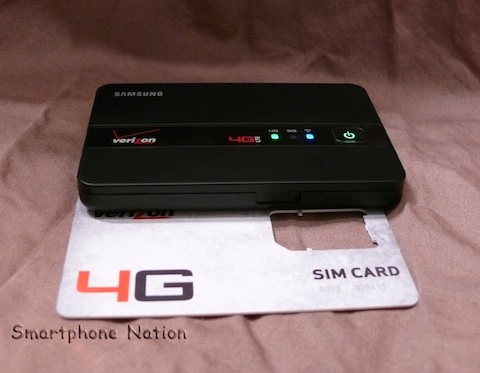 Introducing the Samsung 4G LTE Mobile Hotspot, Verizon’s first 4G mobile hotspot device. Late last year, we saw the introduction of the first two 4G-compatible devices, both being mobile broadband cards that required the device to be plugged into the USB port. Last month we saw the first 4G-compatible handset released on the network, the HTC Thunderbolt. Now we are finally seeing the introduction of Verizon’s first 4G mobile hotspot that will allow you to create a Wi-Fi network and connect up to five different devices up to it. We have just starting the device today, so we are not going to post a full review just yet. Verizon says that customers can expect download speeds of 5 to 12 Mbps and upload speeds of 2 to 5 Mbps in areas covered with 4G. We have taken some hands-on shots with the device and created an album for your enjoyment.