The first tablet running Google’s Android 3.0 Honeycomb has hit the Verizon network. While Android tablets, like the Samsung Tab, have been available for a while now, the Motorola Xoom is the first to use a version of Android specially designed for tablets. There are so many different tablets on the market and it is hard to decide which one to get. The obvious one with the most hype is the iPad 2, but that is not the device for everyone. Will the Motorola Xoom be able to compete against the other tablets out there? Read on to find out.

The Motorola Xoom is sleek, while still being simple. It has a 10.1 inch display that takes up the majority of the front of the device. The display is 1280 x 800 pixels, capacitive, and responds to multi-touch. Above the display is a Motorola logo, Verizon logo, and a front-facing camera. Other than that, the front of the Xoom is plain and simple, which is not necessarily a bad thing.

Turn it around and you will notice that back is fairly simple as well. The back is made out of two different materials, the top being a rubberized material and the bottom feels sort of like a chalk board. We wish that Motorola went with the rubberized feel all around because it would make it easier and more comfortable to hold. The top left and right have speakers that sounds pretty good when playing music and videos. We turned it up as loud as possible and it still sounded pretty good without being distorted. There is also the 5MP camera with a flash, we will talk more about that later in the review. Motorola logo imprinted in the middle, a Verizon logo on the bottom left, and a Google logo on the bottom left. Holding the Xoom while using it is not as comfortable as we would like. It is a little uncomfortable to hold since the border along the front display is not rounded. On the bottom are all of the connections including a microUSB port, mini-HDMI port, and the charging port which requires a proprietary connection.

Packed inside the Xoom is a 1GHz NVIDIA Tegra 2 processor and 1GB of RAM that makes the device run pretty smooth. There really is not much lag, even when a lot of apps are open. The Xoom comes with 32GB of internal storage.

Unfortunately, the Xoom is not yet 4G compatible. It runs off Verizon’s 3G network which gives decent speeds. However, its 4G network blows it out of the water as we saw in our HTC Thunderbolt review. The Xoom will be upgradable to 4G soon, but is going to require you to send in your device and be without it for about six days. Why they didn’t just put it in at launch? We have no idea. You can sign up here to be notified when the 4G upgrade is available on the Xoom.

The Xoom runs on Google’s Android operating system. It uses Android 3.0, an operating system specifically designed for tablets. While many other tablets are using an older version of Android designed for phones, the Xoom utilizes the new OS. The changes from previous Android versions and 3.0 are very noticeable and significant. Click the power/standby button located on the back of the Xoom and it will turn the screen on. This will reveal a display with the time, date, notifications, and the unlock screen. To unlock it, you drag a circle with a lock in it any way. 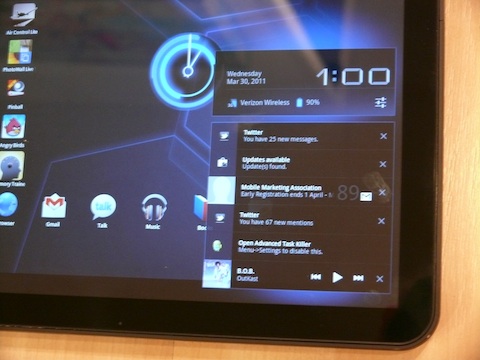 Once unlocked, the Xoom will reveal the main home screen with any icons and widgets you add to it. There are five different home screens that can be accessed by swiping either left or right. The bottom left has three virtual buttons: a back button, home button, and a button to see open apps. The bottom right side will show small icons that will alert you to app upgrades, emails, time, battery, signal, and more. Clicking on the time will bring up a menu with all the details and allow you to turn on and off things like Wi-Fi, airplane mode, and lock screen orientation. The top left has virtual buttons to do a Google search and speech control. The top right will allow you to display all apps you have and add widgets to the home screen.

Android 3.0 is a relatively new OS for tablets. For that reason, the apps that are specifically made for it are still pretty limited. There are some useful ones, but it is obvious that more will be coming soon. You are able to use apps designed for older versions of Android so no need to worry, however the ones made for 3.0 look best.

Overall, the software does a good job of enabling users to navigate around and allowing for a good user experience. This Android version is a bit darker when comparing it to the iPad. While the iPad has an OS that is bright and inviting, Android 3.0 uses a lot of dark blues and blacks. Switching between apps is simple with the virtual button that will bring up your most recent apps. The powerful internal specs allow you to open apps instantly and run a lot at one time.

The Xoom has both a front facing and forward facing camera. There is a 5MP camera on the back with an LED flash that takes decent pictures. Additionally, there is a 2MP camera on the front for video calling, taking pictures of yourself, and things like this. The Xoom also takes 720p HD video using the back facing camera. There are a lot of options in the camera app that make it easy to take some quality pictures.

The web browsing experience on the Xoom is really good. It uses a tabbed interface, similar to Firefox on the computer. You can easily create new tabs and remove ones you don’t need. Of course, the major advantage to Android is the fact that it is compatible with Flash, making the web browsing experience much more enjoyable. Web pages loaded pretty fast when using the 3G network and seemed to always come out the way they should. Zooming in and out was simple with the pinch and pull action that is seen on most touchscreen smartphones and tablets.

The Motorola Xoom is one of the best tablets on the market right now, but it is still being improved. First, the tablet is only compatible with the Verizon 3G network and will require you to send it in to make it 4G compatible whenever that is. While Android 3.0 is a huge step from previous Android OS’ on tablets, the marketplace is still does not have a diverse collection of applications made specifically for it yet. However, this will be coming in the future as more developers begin creating them. The Xoom comes at a high price when bought outright, $799.99, and a still rather high price when bought on a two-year contract from Verizon, $599.99.