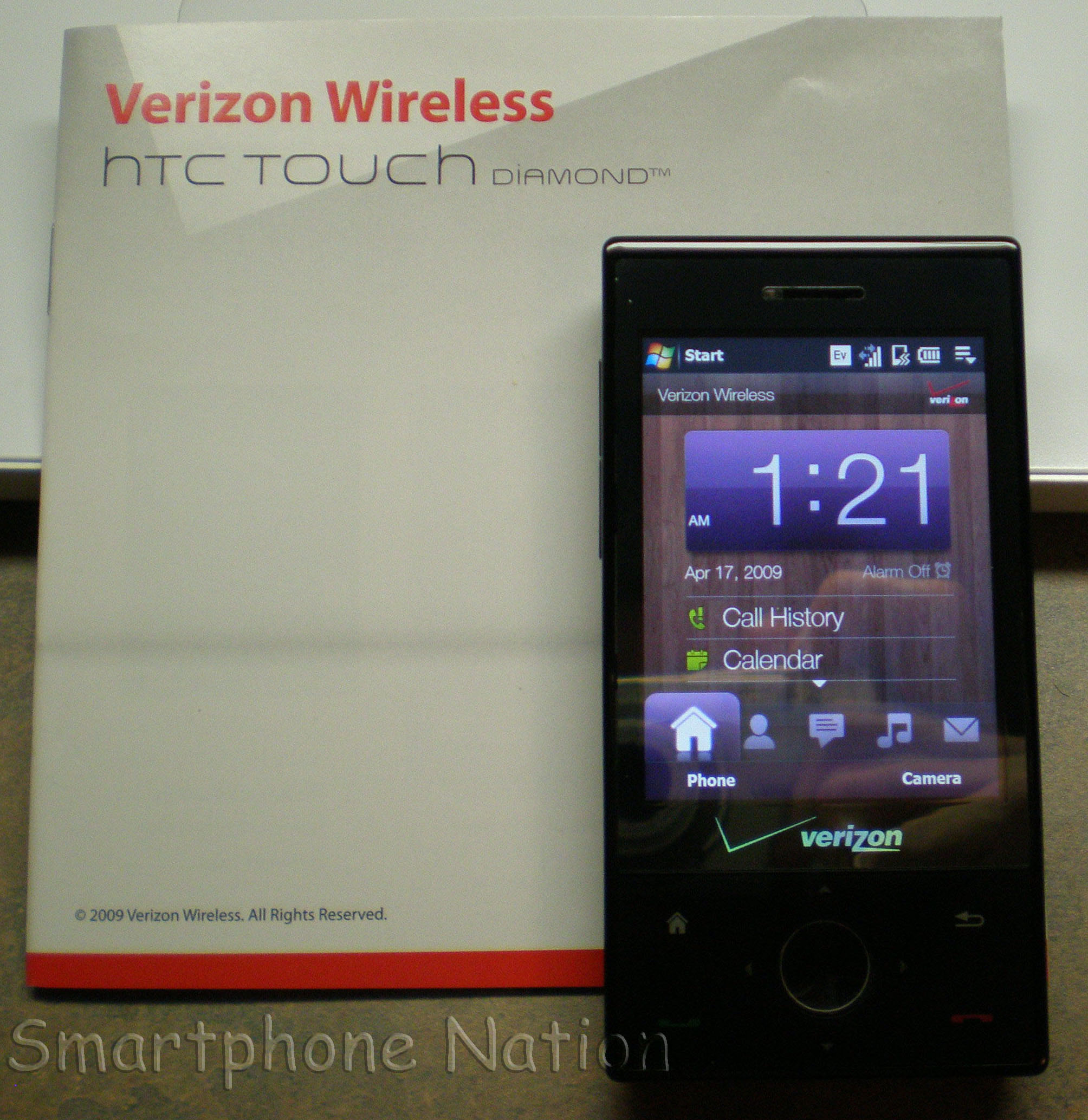 The Verizon Touch Diamond is a sleek and sexy phone. This being our first HTC Touch Diamond, we did not know whether this phone was going to be heavy and clunky or light and thin. However, after receiving and unboxing the unit, we were surprised to find that it is not as big and heavy as we expected. In fact, we were quite pleased with the shape and how it fit in our hands. The device only weighs a total of 4.2 ounces when the battery is in it, making it light enough to not have to worry about carrying around with you while still not making it feel cheap. We love how the back is shaped sort of like a diamond to complement the name of the phone. The phone is all black which makes it a magnet for fingerprints.

The Verizon Touch Diamond has a few buttons on it that serve to be important. On the front of the device there are five buttons. These five buttons will allow you to send and end a call, to go back, to go home, or to select something. While most of these functions can be done directly from the touch screen, it is still nice to have the option. Turning over to the back there is a 3.2 megapixel camera with autofocus. On the top left there is the power/standby button; holding this button will turn the device on and off, pressing it will put into or take it out of standby mode. On the left side of the phone there are volume control buttons that also serve as a ringtone volume control. The proprietary USB jack is on the bottom of the phone that allows users to charge it, connect to the computer, or listen to music. We were disappointed that there was not a 3.5mm headphone jack since this phone has a lot of media features to it, but HTC gives you a piece to turn the proprietary USB into a headphone jack.

The screen on the Verizon HTC Touch Diamond is a 2.76-inch TFT LCD with VGA resolution. The high quality display shows when looking at the TouchFLO graphics and sample videos. The touch screen was nice and responsive to our actions without having to apply too much pressure. In terms of the display we have no complaints whatsoever.

The Verizon HTC Touch Diamond runs Windows Mobile 6.1 with HTC’s TouchFLO 3D interface. TouchFLO makes Windows Mobile 6.1 look great, especially with its 3D graphics and sleek interface. We were impressed how easy it was to use, compared to the standard Windows Mobile home screen. For Windows Mobile fanboys and girls, you can choose to use the standard home screen or try TouchFLO with a switch of a setting. With TouchFLO you can slide the bottom bar with your finger to get to different options like home, favorites, messaging, music, email, browser, photos and videos, apps, weather, and settings. When on these different option screens you can do an up or down slide motion to go to the next item in the menu. For example, if you have a bunch of text messages, you can swipe your finger up to get to the next text message and scroll through them that way. This also works in other menus like pictures, music, and most of the other ones. One thing we love about TouchFLO is that there is an icon on the menu bar that shows what applications are open so you can easily clear up some memory without going through all the menus. While TouchFLO is great, Windows Mobile 6.1 is still the same OS, but with an amazing skin. Because of this, Windows Mobile is still slow at times and lags a lot. There will be times when you run out of memory when trying to open the camera and there is nothing else open, but that is Windows Mobile. This is going to be as good as it gets if you want a Windows Mobile phone. The Touch Diamond has packaged as much as it can to speed up and make Windows Mobile not look slow and boring.

If you have ever used a Windows Mobile phone before you know that the mobile Internet Explorer is not very good for browsing the web. For that reason, HTC has decided to put Opera Mobile web browser on the phone instead to make for a better web experience. Opera Mobile gives a better web experience than Internet Explorer does and allows for easy finger motions to move around the page. If users are hoping to go to a few webpages or open a link in a new tab, that is possible with this web browser and it is very easy to do. We found that pages render pretty much the same as they would on a computer. When comparing the Touch Diamond to the iPhone Safari browser, we found that this is probably the closest you are going to get to Safari without having an actual iPhone. To navigate around the webpage you just move your finger around the touch screen to get to the section you want. You can then double click a section of text or a picture to zoom in. When zooming in on text, it will format the text to fit just right, making it very easy to read. If you find Verizon’s EVDO network to be too slow, you can always use Wi-Fi if it is readily available since this device is Wi-Fi ready. 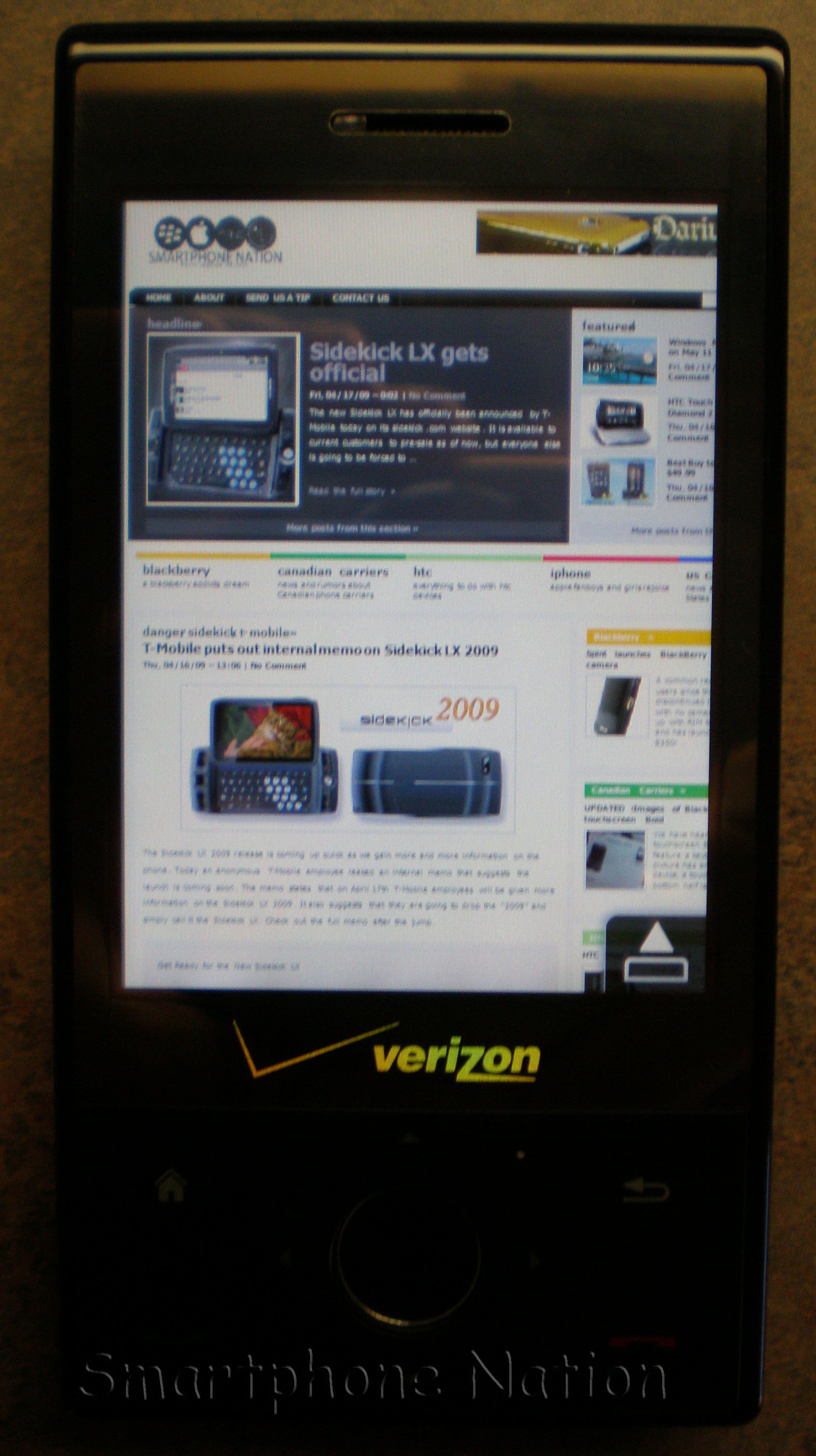 Along with the web browser, there is a YouTube application that bridges the problem of having no flash player on the browser. With this YouTube application it is possible to search through any video or see the most popular ones. The video quality when using this application is awesome and goes into full screen mode. One problem we had was that we would sometimes get an error saying there is not enough memory when trying to watch a video. The sound quality while watching videos was surprisingly good. It stayed clear even when loud but did not have much bass at all.

The Touch Diamond has a 3.2 megapixel camera with autofocus. The quality of the camera is very good and better than most other similar camera phones. The autofocus makes a huge difference in the quality of the picture, putting the image in focus and making it looks crisp. After taking a picture it is very easy to send it in an email or picture message to friends with a press of a button. Overall we were very happy with the camera quality.

The HTC Touch Diamond is compatible with Verizon’s visual voicemail application that comes in handy if you get a lot of voicemail. On the Touch Diamond the program will allow you to see all the numbers who have left you voicemail and play each voicemail individually. From this application you can call the person back, add the contact into your address book, or send a text message to the person. This service is going to cost an extra $2.99 a month which is not too much if you use voicemail often.

In my personal opinion, touch screen keyboard are not as easy to use as physical keyboards and the Touch Diamond is no exception. However, I do think that the keyboard is usable and laid out well. There are three different keyboard styles you can use. The default is Full QWERTY which is a full QWERTY keyboard that is pretty nicely spaced out and has an option for T9. I personally liked the fully QWERTY because it is what I am used to. However, it was difficult typing with fingers alone, making me utilize the included stylus. Secondly there is what they call a Compact QWERTY which is just two letters to a button (except m and l). This way is much easier to type with your fingers and it will guess what you are trying to say when you are typing the word. If you have ever used a BlackBerry Pearl or Storm you will recognize this as SureType. Lastly there is the Phone Keypad which pretty much explains itself. It looks just like your “dumbphone” keypad and you can use T9 or ABC with it.

We made tons of calls on this device and found it very comfortable to hold on your face. When making calls, the sound on our end was pretty good and we could hear everything clearly and loud. On the other end most people said I sounded like a typical cell phone, which I guess is a good thing. Signal wise we always had at least three bars here in Tampa, FL which is to be expected in a city. We never lost signal or dropped any calls which is a nice change coming from our BlackBerry Bold. We never lost EVDO signal either which allowed us to get on the high speed internet anytime.

The battery on the Touch Diamond really surprised us by how long it lasted. The battery is really small and compact which lead us to think it was not going to last very long. We were wrong. When we tested the battery on this device, we found that it lasted us the whole day with pretty normal use. We did a decent amount of texting, a few phones calls, some web browsing, and a few emails.

All in all we really liked this phone a lot. While we are not the biggest fans of Windows Mobile, TouchFLO 3D came through and improved the software a lot. We had no trouble navigating around using our fingers and the graphics were great. The body of the device is really small and sleek making it a very cool looking device. A lot of Windows Mobile phones have problems with battery life, but this phone is an exception with great battery life that will last you throughout the day. Who would we recommend this phone to? Well if you are looking for a small device that has a lot of capabilities to get in touch with the internet, then this is a phone for you.

Let’s Talk has Verizon Cell Phones for Sale for the best prices. Check out the latest from our sponsor.