AT&T is adding another Windows Phone smartphone to its selection. The HTC HD7S will be launching on June 5 for $199 on a two-year contract. The HD7S has a 4.3-inch Super LCD touchscreen device,

Verizon today announced the availability of its first Windows Phone device, the HTC Trophy. This 3G phone comes packed with a 3.8-inch WVGA touchscreen, a 1GHz processor, and a 5-megapixel camera with 720p HD

It was just a few weeks ago that Best Buy accidentally put up the HTC Trophy on its website. It was promptly brought down. Jump to today, the phone is back up on Best Buy’s website 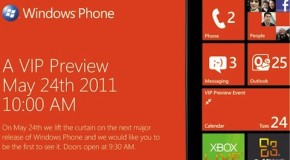 AT&T’s big announcement today was to announce the HTC Inspire 4G, but Dell quietly launched the Venue Pro on AT&T today too. While it is mysteriously absent from the AT&T website, it is available

Android to become largest smartphone OS by 2012; according to Gartner

According to a new report released by Gartner Research, Android will move into the number one spot as the most popular smartphone operating system worldwide by 2012. This means that Google’s Android platform will

It is evident that Nokia has to do something to compete against the iPhone and other Android phones. To put it simply, the Symbian operating system is just not cutting it. Stephen Elop, Nokia’s

Firefox, one of the Internet’s best web browsers, is now working on a project for the Android platform and it will probably be known as Fennec as well. Fennec, which means little fox, is currently still