The first phones with a dedicated Facebook button are finally available for preorder from Amazon UK. The HTC ChaCha and Salsa are unique because of the Facebook integration. The ChaCha has a QWERTY keyboard, 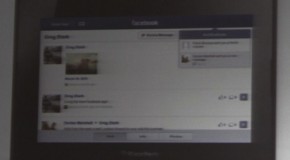 The BlackBerry PlayBook is finally getting more apps to improve the device’s functionality. RIM announced today at BlackBerry World that it is introducing an official app for Facebook. Tom Goguen, VP, Collaboration and Social Networking

It wasn’t too long ago that Facebook 1.5 for BlackBerry leaked and gave us some great new features. Today Facebook and RIM have officially released the application. This application is now available in BlackBerry

Windows 6.5 is going to bring tons of great features, one of which being a new Facebook application. This application will allow users to do many of the essential tasks like uploading videos, uploading

Facebook addicts with a BlackBerry addiction have been long awaiting a new Facebook update that will finally be more than a waste of space in their phone. Well Facebook 1.5 may be the answer