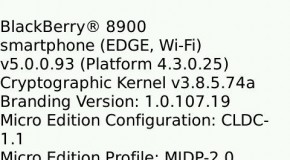 A few weeks ago 5.0.0.90 was leaked for the Bold and the Curve 8900, but there were many problems with the early release making it almost unusable on a primary phone. However, 5.0.0.93 just

Today a tipster leaked beta OS 4.6.1.199 for the BlackBerry Curve 8900. Please remember that this is a beta OS and is not officially released by BlackBerry. Download it now! MegaUpload Link

Rumors have been flying around the net about the BlackBerry Curve 8900 (code named Javelin). Various sources have lead to a February 18th release date on the T-Mobile network. This phone will be the