It’s been a long time coming…but we finally are seeing another 3G smartphone on T-Mobile’s network. 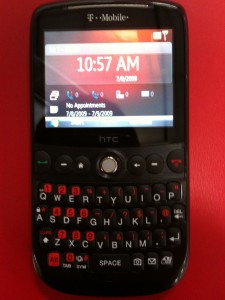 We had a few hours with the phone and there’s not much out of the ordinary here compared to your standard Windows Mobile phone; so we’ll just start with the quirks and then move to the good stuff.

Our first major complaint was the trackball movement speed. Out of the box, navigating the menus felt extremely laggy and delayed compared to trackball navigation on other phones (BlackBerry, Sidekick, etc). We went into the settings menu and updated the navigation setting to the most sensitive and while we saw a slight improvement, it was still laggy enough to warrant a complaint.

The device comes only equipped with Window’s Internet Explorer and while easily replaced, they should have considered adding in another more usable browser.

Now on to the good stuff, we have to say this is one of the best QWERTY keyboards we’ve typed on in a long time. The buttons were large and had excellent tactile feedback. Each key has a rubberized coating and when you press down you get a decent, but not overly powerful, click. We were able to jam out sentences extremely fast right out of the box with hardly any learning curve.

Screen brightness and resolution was beautiful. The phone was bright enough to see in a heavily lit environment and images displayed were crisp and clean.

Size and form factor of this phone was almost perfect to me. The thinness of the phone was just perfect while the width was just good enough to fit in the QWERTY keyboard and large screen. The length of the phone was perfectly fine to me but a few others noted that it was just a tiny bit too long.

In conclusion, we think this is one of the best (non touchscreen) Windows Mobile phones out there. With a little bit of personal customization, the device could act as a decent mobile powerhouse.

Check out our unboxing vid to see what all is included inside:

About the author: Tony Ortiz View all posts by Tony Ortiz