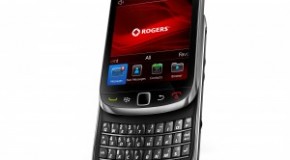 The BlackBerry Torch will finally be making its way to Canada on September 24th. Rogers announced the availability of the phone on its network today. The phone will be available online and at Rogers

Rogers to get the BlackBerry Torch 9800 September 15th?

Future Shop does it again. The Canadian home electronic store (similar to BestBuy and owned by BestBuy as well) has the new BlackBerry Torch 9800 listed to be release on September 15th on Rogers