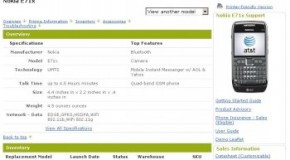 We know that the Nokia E71x is coming to AT&T after the official press release from AT&T, but we did not know the date. A document that appears valid has leaked and hints at

Just when you thought the E71 was old news, Nokia decides to bring it back. Nokia introduced two new colors to the E71 line. Starting today, you will be able to get your hands

Earlier today, Nokia announced the Nokia N97 in Barcelona. Phonescoop was lucky enough to be at the end and posted a video (above) of the device in action! It comes in white and black

The Nokia E71 is known for being one of Nokia’s most solid phones on the market and it caters mainly to business customers. With a very sleek and metallic look, the E71 runs Symbian