Steve Jobs has resigned as Apple CEO, Tim Cook is the next CEO

Apple has just sent out a press release where Jobs states that he is resigning as Apple CEO, becoming Chairman of the Board. Tim Cook, COO and interim CEO, will be stepping up to

Today Apple published a press release confirming that it would be showing off its next version of iOS and unveiling its iCloud service. We have heard a lot of rumors about these iOS 5 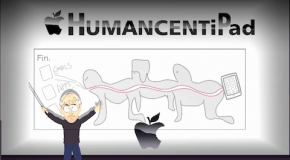 Last night South Park aired its season 15 premier on Comedy Central. The episode, titled “Revolutionary New Product” poked fun at Apple and its recent location tracking issues. Be warned, there is profanity and

Today News Corp announced The Daily, an iPad-only daily news source that takes advantage of all of the iPad’s unique capabilities like swiping, sliding, zooming, etc. The Daily is published 365 days a year

Earlier, we spoke about how the new iPhone 4, which was just released today actually, had dramatic signal dropping due to the metal band around the iPhone 4. Well it seems that people have

The rumor mill has come to a grinding halt. Amidst hope and doubt, Steve Jobs announced during a presentation this morning that the new 3G iPhone will start at $199 worldwide. The new 8GB