The Lumia 900 was announced back at CES and is finally getting released on April 8. AT&T is now taking pre-orders on the phone and is offering it for free to new customers. Existing

iPhone pre-orders to arrive on June 23; some arriving today?

Earlier today Apple sent out an email to people who pre-ordered the iPhone letting them know the phone would be getting delivered on the 23rd. This come as a surprise to customers who were 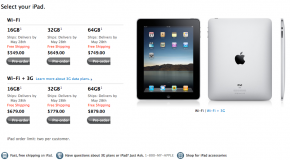 As you may of heard. Apple today has announced that they will start accepting pre-orders around the world for the Apple iPad. Canadians will have the choice of 2 different models in 3 different

Verizon has officially announced that the BlackBerry Tour will be available in stores and online On July 12th. While the phone company has opened up pre-orders to consumers, the pre-ordered device will not ship

Amazon is offering the Nokia E63 for pre-order for a mere $500. The E63 is the predecessor to the E71 and is already released in Europe. The E63 sports Wi-Fi, a 3.5mm headphone jack,

Best Buy has begun taking pre-orders for the Verizon BlackBerry storm. It requires a $50 refundable deposit. The phone will be priced between $199.99 and $299.99 with a two-year contract, according to an internal