A major national retailer’s list of upcoming phones has made its way on the Internet and is giving us phone addicts some things to look forward to. Check out what it has to offer:

Just when you thought the E71 was old news, Nokia decides to bring it back. Nokia introduced two new colors to the E71 line. Starting today, you will be able to get your hands

Today Nokia released the manual to the upcoming AT&T Nokia E71x. The documented is dated January 11th, 2009 meaning it was uploaded one day early. It can be assumed that the release will be

A document leaked of T-Mobile’s winter phone line-up. They seem to have a bunch of nice phones coming out in January and February. Take a look at the line-up: January 21st – Sony Ericsson 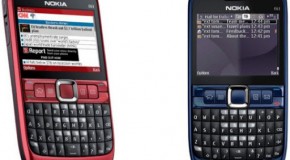 Amazon is offering the Nokia E63 for pre-order for a mere $500. The E63 is the predecessor to the E71 and is already released in Europe. The E63 sports Wi-Fi, a 3.5mm headphone jack,

Earlier today, Nokia announced the Nokia N97 in Barcelona. Phonescoop was lucky enough to be at the end and posted a video (above) of the device in action! It comes in white and black

Nokia E75 Shows Up in the Wild

The Nokia E75 has showed up in the wild once again. The sliding phone features a QWERTY keyboard and a slim design. The features you will see on it is Wi-Fi, a 3.2 megapixel

The Nokia E71 is known for being one of Nokia’s most solid phones on the market and it caters mainly to business customers. With a very sleek and metallic look, the E71 runs Symbian