It has only been a few months since Sprint launches the BlackBerry Tour. However, many business customers have demanded a BlackBerry Tour without the camera feature for various business uses. Today Sprint granted the 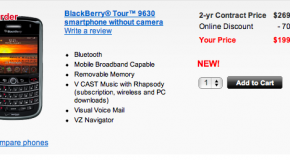 We know that Verizon is getting the BlackBerry Tour on July 12th, but stopping by the Verizon Wireless website revealed another surprise. The company is also going to be selling a version of the

Spint launches BlackBerry 8350i with no camera

A common request among business users since the 8800 series was discontinued is another BlackBerry with no camera. Sprint has teamed up with RIM to answer your prayers and has launched a BlackBerry Curve