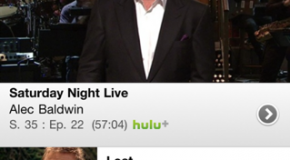 Hulu announces Hulu Plus for iPhone and iPad

There has been tons of speculation as to whether Hulu was going to bring its popular episode viewer to the iPhone and iPad. The speculation turned into a reality today as the company announced

We just told you about the Dell Lightning, which runs Windows Phone 7, but Dell couldn’t stop with that. The Dell Thunder has leaked out with some juicy details and press shots. The phone

Sprint prides itself on being the “first and only 4G network” in the nation. However, it is currently only in select cities. At CES, Sprint had a chance to show off the 4G data