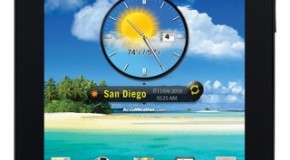 Samsung Galaxy Tab launching on all four carriers in US

Samsung just finished announcing at their live event that they will be bringing the Galaxy Tab to all the four major carriers here in the Unites States. Samsung states that the devices will be

Looks like Rogers are starting to pay more attention on Android phones versus Windows Mobile. They have just released the new Samsung Galaxy Spica Android device. The device has a 3.2” AMOLED touchscreen and