Hands On Review With The Verizon LG Revolution

The first Android-powered phone I can really get behind Some quick notes: If you’ve read my Droid2 review (or anything I’ve previously written/tweeted regarding Android) you know that I’ve always been a supporter of

We got our hands on the DROID X before its release to the public. We’ve decided to make a unboxing video to show off what is included in the box and our first impressions

As you may of heard. Rogers announced today that they will be selling their Xperia X10 devices starting today which means you know we had to somehow get a hold of one of these 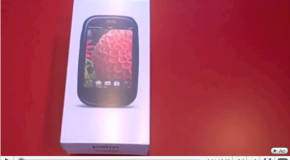 Palm released the Pre Plus on the Verizon Wireless network today. Customers can now go online or into stores and purchase the new phone. A few weeks ago we did a hands-on post when

It’s been a long time coming…but we finally are seeing another 3G smartphone on T-Mobile’s network. The HTC Dash 3G is T-Mobile’s first (and currently, only) 3G Windows Mobile smartphone. Specs include: Quad band

Our buddys down from Rogers just dropped off a package for us today and opening it revealed the beautiful Sony Ericsson Xperia X1a. Check out the unboxing video below as well as some shots

Yesterday T-Mobile announced that it would be releasing the T-Mobile MyTouch 3G in late July. While it seems customers will not be able to get their hands on it for a while, a few

We got our hands on a Nokia E75 smartphone and figured we would tease you guys with an unboxing. When we received the box in the mail, we were amazed with the packaging. The

The Vodafone BlackBerry Storm is imminent and ready for launch. A gadget website got their hands on one of the Storms and was nice enough to unbox it and post it on the Internet.