The Nexus S 4G, is just a minor upgrade to the already released Nexus S. It is the successor to the first device, the Nexus One. For those of you who do not know the meaning of the word Nexus, it means “to connect,” which in today’s world is pretty much all we do on an everyday basis. With social media being an extreme powerhouse in today’s world, why not have a device that will do what we do from time to time, “Connect.” The Nexus S 4G does just that. Its like almost every phone that is coming out every other week. With all these devices on the hot seat trying to compete against each other for sales numbers, what makes the Nexus S 4G stand out from all the others? Hit the jump to find out what those answers are.

The Nexus S 4G was designed with a new design that has never been seen before in cell phones. Google and Samsung claim that the Nexus S is the first device to have such a display, and they’re right: think back to any phone you’ve ever owned and you’ll recall that the touchscreen was flat. This technology is called “Contour” display and it allows for better viewing angles on bright displays; I’ll talk about the display later on in the review. The Nexus S 4G is built off the guidelines of the Galaxy S smartphones that Samsung recently released a few months prior. Full specifications are as listed:

The Nexus S 4G also has an oleophobic front panel so fingerprints aren’t bad on the front while there are quite a few on the back. Although those specs look very tempting, the actual hardware is a bit of disappointment. The phone was made with the same plastic that haunts the Verizon Fascinate and T-Mobile Vibrant. It has a glossy black finish to it and is very comfortable to fit in your pockets. The front of the device houses the 4 inch Super AMOLED screen and its front facing camera. The left side has the volume rocker keys that are solid and don’t show signs of weariness after being used for a while. The right side of the phone has the power off/standby button. The bottom houses both the microUSB/charging station and 3.5 mm headphone jack. The back of it houses the 5MP camera with flash and the speaker grill. From a distance the phone looks as if it’s almost naked, but once up close you see that it does have buttons. 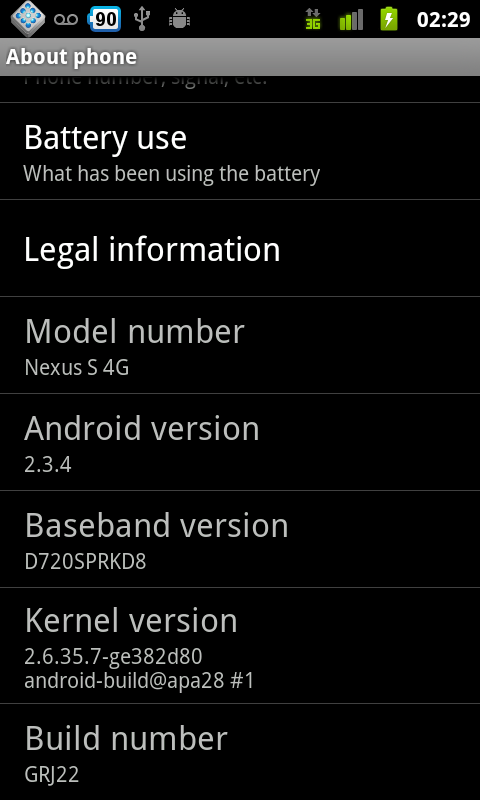 The Nexus S 4G is powered by Android 2.3, Gingerbread, Google’s latest version of their OS. It’s clean, polished and has a touch of green (honestly I don’t know where the green came from but I think it’s to compliment Andy). The most obvious changes from 2.2 (Froyo) to 2.3 (Gingerbread) are the UI enhancements, icons, and a number of speed improvements. Probably the most striking UI change is how much black there is everywhere, starting with the notifications bar. The background of the notifications bar is completely black from its earlier white stage and the cellular connectivity and WiFi connectivity icons change to green to notify you that data is going through and being processed. The AM/PM suffix is gone from the current time, and the icons are simplified to be just grey on black. Overall, it’s a vastly more attractive, high contrast look which potentially improves battery life on AMOLED devices.

The dialer, launcher, and browser soft buttons at the bottom of the launcher also get some green. Green, orange, and black seem to be Google’s favorite colors for Gingerbread at this point. The other major UI change is what happens when you reach the end of a list and tried to overscroll. Previously, when you scrolled to the end, scrolling just stopped. Now, when you hit the top or bottom of some list and overscroll, you get a glow animation at the top or bottom appropriately. The dialer also receives a facelift, getting the high-contrast black treatment the same as most of the 2.3 UI. The buttons are more subtle and glow green when touched instead of orange. Notice how everything that used to be rounded is now square – that’s the other subtle UI change throughout Gingerbread.

To make a long story short, the screen is the exact same Super AMOLED screen from the Galaxy line. It is very, very bright and has nice deep blacks. Watching a couple of videos on your Nexus S wouldn’t be a waste of time because the colors appear nice and pop right at you for a very exceptional viewing. The only difference the screen has is like I said earlier. Google and Samsung have developed the first “Contour” display on a mobile device. If you look at the device, you notice that the screen is curved right in the middle, allowing for an accurate face to phone ratio for while you’re talking on the phone. Viewing angles on the Nexus S are very good, again the curvature is small enough that it doesn’t adversely impact vertical viewing angles. 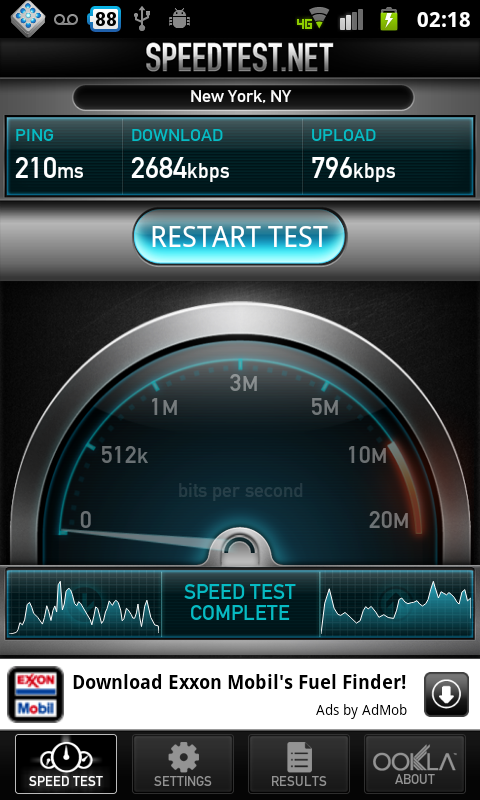 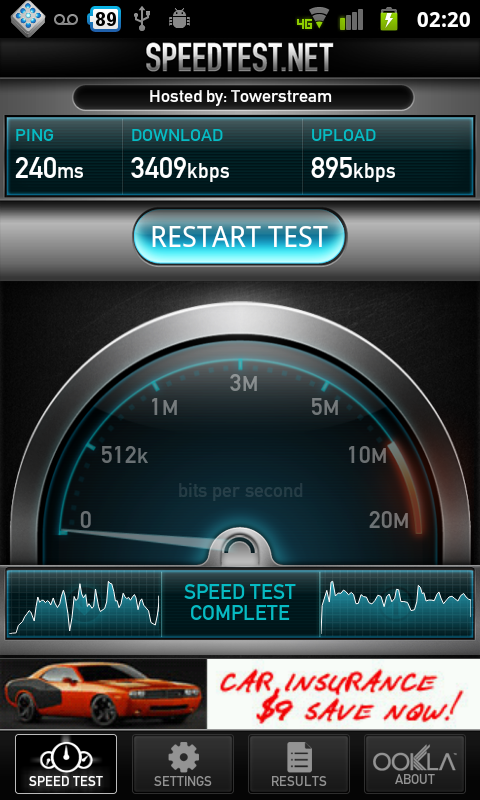 At first when I received the Nexus S, the service here in New York City wasn’t as good as I expected. One day in midtown Manhattan, I literally had one bar of 1X showing on the screen. I thought to myself, “This can’t be true!” and immediately began looking for the nearest Sprint store to help me out. Now I’m a Verizon customer and I dial #227 to reconfigure the PRL and update the cell phone’s antenna to the nearest tower around me. Not knowingly trying this on a Sprint phone, I had no luck. It was a good thing I was around a Sprint store to help me out and a simple move down to Settings>About Phone>Sprint System Updates>Update PRL did the fix. Once the profile was updated, I was good to go. Full 3G and 4G service was at my disposal. Leaving the store I turned off the 4G WiMax to conserve batter power since it drains more because of the higher data output. Making calls after this was no problem and although I didn’t have the full four bars the whole time, I was still able to make and receive calls with very little hassle. Sometimes I would have to wait for the phone to try and grab a signal if there were no bars, but it did it in less than five seconds so there really shouldn’t be a worry. Now when trying to connect to 4G, there were some issues. Few times it took me a couple of minutes to find the service and then connect. At first I thought it was me and where I was located. I don’t have enough recognition to call them up and say, “Hey, you have a bug in your device.” So I left it alone. The other night I’m browsing the web and what do I find?, this, Engadget Investigates: Samsung Nexus S 4G WiMax performance issues. I knew I was right, so I decided to read it. You can get a full glimpse of the article here and see for yourself. Engadget has done all of the dirty work for all of us and both Google and Sprint confirmed the issue and are investigating the problem. But when it did work, I did receive typical speeds in a range of 2Mbps – 3.5Mbps. Nothing out of the ordinary, but pretty fair for having some issues. Besides the little mishap with the 4G, reception and making calls on the device were on par with what I expected from the Now Network. When making calls, the people I spoke to said I sounded loud and clear, which is always a good thing.  Overall even though reception isn’t always shown on the device, don’t let that fool you. There shouldn’t be any worry and if you do have one, just know that the reception issue won’t be as big as this.

The camera on the Nexus S is 5MP of shooting goodness. 5MP is the standard now for most smartphones, with the latter upping it up to 8 or more. The camera on the Nexus S is overall much improved from it’s older sibling, the Nexus One, but its still not perfect. With the lights off and the flash set to auto, the Nexus S is much improved. The reason is that the stock camera now correctly illuminates the object while running the autofocus routine – the result is that in the dark shots are now focused properly. Further, you get an idea for whether the flash reaches far enough to actually do any good. High five to Google for fixing this.

The battery life on the Nexus S 4G is really good. With little usage, we’ve managed to squeeze just two days on a full charge with just WiFi and emails pushing through the device. With normal usage, it lasted us well over a day and a half. Power users, well, you’d manage about eight hours of usage before it tells you that there is 15% of battery left so you can charge your phone. The 1500 mAh lithium-ion battery holds up well enough throughout the day for anyone to use the phone and not be a complete power hog like that other 4G device…

Here it is. Every new Android phone that comes out, we decide that it’s the best one to date. In all honesty, if you’re on Sprint and want a powerful phone that’ll get you through the day with no stops in the road, pick this one up over the HTC EVO 4G. The battery is great, it comes pre-installed with 2.3 Gingerbread Vanilla flavored, and also has 4G connectivity. You get a nice, sleek killer of a device and for $200, you can’t go wrong. Now you still have to pay Sprint’s Premium Data add-on for $10 extra a month, but if the 4G bug gets fixed and you know for a fact you receive full 4G service in your area, why not pick one up?