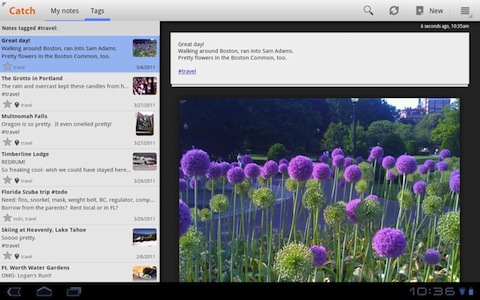 Catch is a app that allows you to create one place to keep all your notes, pictures, images, ideas, places, lists, and almost anything else. The company today announced a new version of Catch Notes for Android 3.0 Honeycomb tablets. This free app brings a lifestream of all your notes to your Android 3.0 device and many other features including:

●      Fragments: Creates multiple views so users can see more data on the screen

The launch of the new Catch Note app comes just in time for Google’s I/O Developer Conference which is begins tomorrow, May 10. This is one of the apps that has been selected by Google to exhibit at the Android Sandbox because it can be integrated into the official Google I/O 2011 conference app. Hit the jump for the full press release.

SAN FRANCISCO, Calif – May 10, 2011 – Catch.com, creator of Catch Notes, the easiest way to capture all the important ideas, sights and sounds of your life into a single information stream, announced today a new version of Catch Notes optimized for Android™ 3.0 Honeycomb tablets. Catch Notes for tablets is available to download for free on Android Market™.

According to industry experts, tablet shipments are expected to rise 238 percent this year.Honeycomb is specifically optimized for tablets and Catch is taking advantage of the new OS with its latest release.

●      Fragments: Creates multiple views so users can see more data on the screen

“Catch makes it easy to capture and organize the stream of ideas and experiences that matter to you most,” said Steve Brown, CEO of Catch.com. “We are big fans of Android, and the new Honeycomb tablet features support our on-going efforts to make mobile information capture simple, fast, reliable and intuitive.”

Catch Notes for Honeycomb tablets has been selected to exhibit at the Google I/O Developer Conference Android Sandbox where Catch.com executives will be on hand to demo their application, answer questions and exchange ideas. The Google I/O Developer Sandbox selects developers who have built applications using the latest Google technologies. Google I/O takes place May 10-11, 2011 at the Moscone Center in San Francisco, California.

Catch Notes provides a framework for mobile and Internet users to record important events and thoughts into a private stream of intersecting ideas, experiences, places and information. This stream captures data that is personally important to the user in text, voice, image and location files, all with free sync and backups to Catch.com.

All content collected in Catch Notes is synced via a secure, encrypted connection and users can choose to share content on Facebook, Twitter or via email. With an open API and open source examples that facilitate the development of a wide range of personal data capture applications, the Catch.com platform supports application developers all over the world.

Catch.com is a leader in developing mobile and web-based applications for personal information capture for both Android and iOS devices. Catch.com applications make it simple to capture, organize and share information and keep it synchronized across devices in the cloud. Numerous leading smartphone applications integrate with Catch.com. For more information, please visit www.catch.com.

Catch.com and Catch Notes are trademarks of Catch.com, Inc. All other registered or unregistered trademarks are the sole property of their respective owners.

Android and Android Market are trademarks of Google, Inc.