Q4 Leaks of Devices and Plans for Rogers? 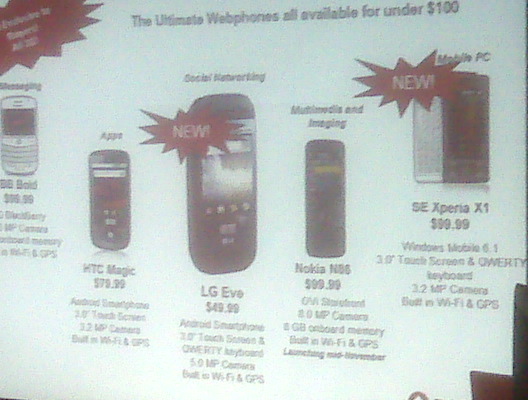 Q4 is soon, and so are sales and a bunch of phone releases for Rogers. Non the less, PhoneModo from HowardForums has released a some pictures of upcoming devices as well as plans and marketing ideas for Rogers. It seems that they aren’t aiming for smartphone users, but instead, the so called “Webphones” Read on for more information about the devices and plans for Q4.

ITS THAT TIME AGAIN! Q4 is upon us, and PhoneModo is here to bring you the details. Of course, you can always find these soon on either themobileninjas.com and eventually it’ll probably hit BGR.

So heres the skinny:
DEVICES
Rogers wants to go away from the smartphone monicker that Blackberry’s and other data devices carry, so they’re focussing on ‘Webphones’ this year. A website will be up in the next couple days (something like www.rogers.com/webphones) to further this idea. Essentially though, they want to focus on web browsing over ‘smart’ things like email etc. So which devices are they doing this? Whats their push?

LG Eve- $49.99 3yr V+D
-5.0MP Camera, 3″ Touchscreen, Android, WiFi, GPS
Theres going to be lots of focus on this phone apparently. It will be the social networking device for the Webphone campaign. So expect it in the commercials.

BLACKBERRY 9700 INFO>>
It was a no show in the slideshow, however the blackberry rep said $299.99 pricing and launch is in mid-November GUARANTEED (shoot for Nov. 21st on this date was his word)

Other Phones Coming..
There wasn’t much information about other phones coming to Rogers, other than the 5 above, but I do know that the Nokia Mural is coming. No pricing released. And as we all know (since its now shipping out to channels) the Nokia Surge is going to be part of the Quick Messaging Device offering from Rogers. They gave a couple of those out at our launch. Nice device for some.